The Lists that Futures Are Made Of

In the beginning of this week’s parsha, the Torah lists the men who will represent their tribes on an expedition into Eretz Yisrael. The tribes and their representatives are listed as follows:

At first glance something peculiar immediately stands out: why does Menashe’s verse include the introductory label of ‘from the tribe of Yosef’ (11) when Efraim, his brother, the other son of Yosef, does not have a similar label (8)? It would be understandable perhaps if Menashe was listed first, then the added label for him could then ‘cover’ Efraim too; but this is not the case. However, a deeper look at this list reveals additional incongruities: for there is no doubt that this list of tribal representatives[1] is modeled after the birth-order of the individuals for whom these tribes are descended from; but, because of this parallel, the multiple differences in these two lists are highlighted.

The following are the children listed according to birth-order and corresponding mother as described in Breishit[2] (Levi is not included because he will ultimately not be represented in any tribal list in the future): 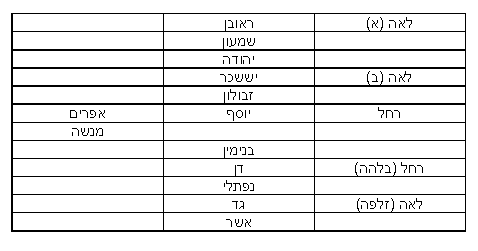 And the list of individual representatives in our parsha:

Comparing these two lists, not only does Menashe have the ‘added’ label as queried above, but he is also listed in the wrong place (he should have been listed after Efraim, before Binyamin). And it is now also revealed that Zevulun is similarly ‘mis-placed’: instead of having been listed immediately after Yisachar, he is instead placed after Rachel’s children. Additionally, when the four children of the maidservants are mentioned, instead of being placed in their birth-order, they are listed in alternating order.

What the meaning of this specific ordering conveys, therefore, is a much graver consequence to the erroneous report of the twelve men who entered the Land. For not only did their jarring report and refusal to enter Eretz Yisrael demonstrate an outward rejection of God’s word, but, based on the order in which these sinful representatives were listed before they embarked on their expedition, we are being told that their report would bear even more tragic fruit: a deep corruption of their connection to the past. Due to their sin, the individual representatives of the tribes in the desert severed their connection to the individuals they were descended from; they in fact rejected the Brit Ben Habtarim - which was to culminate in their entering into the Land - promised to Avraham, and passed down through Yitzchak, Yaakov and his twelve sons! The total incompleteness and mis-ordering which the Torah employed to list these spies foreshadows the true tragic nature of their mistake. On this day, with their erroneous re-writing of the future, they also tragically disassociated themselves from their past.

Following this episode, there is one more time where a group of individuals, representing the tribes, is listed. At the end of Sefer Bamidbar, the Torah presents the following list of leaders who would oversee the inheritance of their respective tribes in Eretz Yisrael:

Within the ordering of this list, fittingly, there is not one ‘correctly’ ordered placement: Reuven is not even listed; Yehudah is placed before Shimon, Binyamin is the first listed of Rachel’s sons, followed by (only) one of Bilhah’s sons! Yosef’s sons are then specifically placed in the wrong order, followed by Lea’s two later sons - also in the wrong order; finishing up with only one of Zilpah’s sons (Gad is not even mentioned), and Bilhah’s second son. This total ‘chaos’ perfectly represents the complete destructive consequences of the sin perpetrated in the episode the last time individuals representatives of the tribes were mentioned: there is absolutely no link between the present and the past; there is no remnant of the connection between Yaakov’s sons and the tribes who descended from them.

However, a closer look at this ‘chaotic’ list reveals an even deeper meaning to the method with which it was presented: for there is in fact a purposeful ordering to this chaos, revealing an additional layer to the significance of this list. The order reflects the tribes’ inheritance in Eretz Yisrael! Starting from the South and continuing Northward, each tribe paired with the tribe listed immediately after it: Yehudah and Shimon inherit adjoining territories[3], Binyamin inherits alongside Dan, Menashe’s portion falls out immediately below Efraim’s, Zvulun and Yisachar are neighbors, with Asher and Naftali together completing the inheritance in the North[4] [5]. So this list’s unique presentation actually conveys two aspects of the same lesson: while the ‘chaos’ - in relation to the birth-order - reflects the distinct disassociation of their present from their past due to the sin of these ‘scouts’, the ‘ordered chaos’ - which follows the tribal inheritance - simultaneously reflects upon what their present is truly founded: their future life in Eretz Yisrael, the very Divinely-intended existence the previous generation had forfeited.

[1]    The lists I will be comparing are specifically individual representatives of the tribes (not the tribes themselves) and ones found not within a narrative episode but rather an ‘objective’ listing.

[2]    Efraim and Menashe, born to Yosef in Egypt, are eternally used to represent Yosef, in the opposite order to the way they were born, just as Yaakov 'decided’ in Egypt before his death.

[3]    In actuality, Shimon’s territory is subsumed within Yehudah’s.

[4]    This also explains why Reuven and Gad are left out of the list; they were inheriting outside of Eretz Yisrael’s proper borders.